Today’s ride: The CASA River Century in Shepherdstown WV. This is an excellent early season ride. Held in mid-May, while the weather is cool, this is a rolling ride that has excellent scenery. West Virginia is hilly, but the hills on this ride are short climbs followed by refreshing descents. Often you’ll get much of a climb done through momentum from the previous descent. Riders can see wildlife, mountains, river views and farms. The ride is  well supported. There are two loops to the century, so riders can drop off jackets or other items as the day warms up, and there is a variety of good food served to the riders at the middle and end of the ride.

The Experience: This year there was a torrential rainstorm the day before the ride which caused some local flooding.  Some of the roads on the course were closed. The organizers had to map a new route for 50 miles the night before, and then asked the century riders to make two circuits.  The organizers did a good job under tough conditions to hold the ride.  I had been sick the day before, and I was recovering. So I knew that with my body weakened, the ride would be tough. I could have reasonably ridden a shorter ride, stopping at 50 miles, or simply not gone, but I chose to harden up and ride the entire thing. Was this wise? No. There were consequences to pushing though the pain and riding anyway. Yet I chose to tough it out and complete my 100 miles. Serious cyclists talk about suffering in offhand ways. We treat suffering as something we have to do, the price of riding. We learn to recognize when other riders are suffering. In a race, when you see suffering on someone else’s face, you attack. When you’re riding for fun, you support each other. At the end of the ride, I needed my friends around me.  It was a windy day, and chilly when we weren’t in the sun. The scenery was amazing. The long views from the top of the ridges were outstanding.  I ended up riding normally for about 60 miles. Then things started getting tough. At around 85 miles my legs ran out of juice and I started cramping up. Was I drinking enough? Yes. Was I eating enough? I thought so. Did any of that matter to me? No. I was in pain, but I just kept going. Assists go to Eric Sanne, John Koehnlein and Tom Roman for staying with me and seeing that I was safe.  Thanks, guys! I feel good about riding through the pain, but it’s an experience I don’t want to repeat very often. I know I’ll have to suffer again though. We all have rides where we’re suffering more than usual and there is nothing we can do but keep going. The last 10 miles were driven by the promise of a beer at the end, and the shelled pistachio nuts that I brought to share. This was a very unusual set of circumstances for this ride, and for me. In any other year, this is a ride to look forward to!

Selections from my mental iPod during the ride: “No Myth” by Michael Penn, “Someday, Someway” by Marshall Crenshaw and “Wild Night” by Van Morrison. 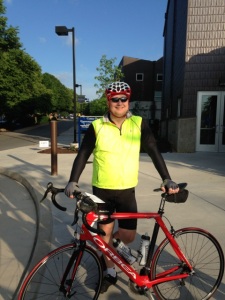