My first century ride was at the Seagull Century in 2006.  I’ve ridden every Seagull since then, with the exception of 2015 when the event was cancelled due to a hurricane coming up the coast. The Seagull is one of the largest century rides in the US.  There are larger rides, such as the “Hotter than Hell Hundred” in Texas, but the average century ride will have less than 3000 participants, and the Seagull typically draws more than 7000, particularly if the weather is good. It’s a flat ride, and while that presents it’s own challenges, the lack of hills makes it popular to a lot of riders. Big events draw a wide range of people and they create some unusual riding conditions.  You’ll often see both the best and worst of cycling on display at events like the Seagull, and this year was no exception. Big events can be dangerous environments. I have friends that don’t like riding the Seagull.  It’s flat, which means you’re constantly pedaling, not coasting, and it puts stress on your contact points with the bicycle – hands, feet and seat. But it’s also a fun event with a lot of activities and despite the crowds, it can be a great time.

From left to right: Amy, Carmen, Stephanie, Carol, Myself, John S, John K and Ron at the Assateague Island rest stop during the 2017 Seagull Century.

I have the good fortune to ride with good friends.  We all know the risks we face, and how to minimize them. We communicate well, we ride within the conditions, and we know our limits. This doesn’t come by accident. We have experience that has been hard won and passed among us through stories, lessons and advice over many years. We’re aware of what to do, what not to do, and what to avoid. This year we had a first timer with us. Amy had never ridden a century, but before she started she already had more information about what to expect than most new century riders and many experienced riders.  Even so, she had questions afterward, and they were good questions. Between the experience and the information, I think she has passed the “beginner” phase, because she has the information she needs and the experience to know how and where to apply it.  In this post I’m going to try and relate a few things about the art of cycling, and I should state for the record that my knowledge is not comprehensive, though it is extensive. We’re all still learning.  I’m going to talk a lot about my ride at the Seagull this year, but much of what I’ll relate will apply to large events. They’re unique in many ways. Some of those unique elements are good, and others less so.

There is limited room on the typical road to accommodate cyclists, traffic control can be a thorny problem at big events, and a big event draws everyone from the least experienced newcomer to the seasoned bike racer, and if you’re not aware that there is an art to the game, you won’t learn it at a big event.  The difference in styles between the riders in limited spaces expands the chances for accidents and makes being alert and careful much more important than many riders realize. Many riders, through no fault of their own, make elementary mistakes simply because they’re not used to riding events at all, much less events with so many other people to cope with.  There are places where you can expect to see problems at a big event.  Here are 4 of them:

This is a common sense list, and it applies to any event, but at a big event like the Seagull Century, problem areas are multiplied by the sheer number of riders. The chance for trouble if you’re not careful is much greater than at smaller events. At the start, riders stand or mill around looking for friends. Some are eager to leave, others are lost, some are looking around for people or frantically calling or texting others to find them. Some are socializing. In short, it can be a maze of distracted people.  My team met before the start, and got going together. It takes some coordination, and we had to slowly make our way from the campus of Salisbury University where we parked to the place where we found open road ahead of us.  Rides are usually “show and go” and many people will leave early to avoid crowds, but some will socialize as they gather, and the chance to get split up or stopped is good. The lesson from experience is to go slow and have a plan.

The early miles of a big ride like the Seagull Century are always tense. Legs are fresh, riders are excited, and adrenaline flows. Some want to complete their ride in 5 hours, some just want to finish. Some ride side by side and talk with their friends, leaving much less room to pass them safely. Others find themselves charging ahead as though they’re racing, forgetting the way they trained and using more energy than they might otherwise. It’s a chaotic time. My friend Carol has a talent for finding open spaces between knots of riders at the start of the Seagull.  We trusted her to find us a clear path, and she rode at a strong pace. Riders begin to string out after a few miles, but there are still an abundance of them. Not everyone will let faster riders pass. Not everyone will pass safely. This year, the first segment of the ride was through a mist or very light rain. That created problems as well. By the first stop, the rain had ended, and the roads were starting to dry.

Rest stops are another trouble spot. They are choke points, with riders slowing and stopping, getting in each other’s way, forming queues for water, food, bathrooms and bike service if it’s available.  Most riders won’t skip a rest stop, and most will charge into the first rest stop while still feeling strong. The general chaos as riders stop and go is common to any rest stop, but the more people, the more chaos.  Getting what you need and starting again without cooling down too much is important. In our case, we had become separated by the first stop, but we managed to regroup, resupply and get out without any delay. When we got going again, there were still a lot of riders on the course with us, but the riders thinned out because of the rest stop congestion. It felt like we had more room to ride in. By this time the riders on shorter courses were also separated from the Century riders, and riders were settling into a pace. Managing rest stops is an art, but if you’re careful, you can make it through even the most congested rest stops without accidents.

In the final miles of a century, riders have usually become so tired that they lose focus. The final 25 miles of the course is another place where you have to pay attention. By this time your body has had to refuel and if you’re not eating and drinking enough as you go, the chances of you losing focus and crashing increase. I heard about a crash that required an ambulance in the final miles. It wasn’t a surprise to me. With a lot of tired riders close to each other, mistakes are easy to make. Thankfully, by the end, the road tends to be more open.

The Seagull gets it’s share of accidents because of the sheer number of riders.  These are usually avoidable. Entering the second rest stop, volunteers asked riders to dismount and cross the train tracks at that point because of large gaps there.  One rider apparently crashed trying to ride over it rather than dismounting. We saw a crash on the road between the second rest stop and Assateague island, with a rider going down after touching wheels with another. One of the riders with the rider who crashed turned his bicycle perpendicular to the direction of travel to look back at her, partially blocking the road. That wasn’t the way to help. Inexperienced riders often make mistakes when riding in the middle of groups, because they seldom train in groups. You have to be careful around them.  Finally, what you’ll find at big events are people who try to draft others without knowing the first thing about drafting or riding etiquette. The pros make drafting look easy. So too many clueless riders think it’s easy.  It isn’t. Neither are these events races. They shouldn’t be approached like one. A lot of riders end up trying to save some energy by wheel sucking – which means they cling like a leech, without saying a word, as if they have a right to be there, or they’re just doing you a favor by riding close behind you without saying a word. They form up lines without a clue as to how fast they’re going, and they sometimes burn out early in the ride – all because they think they know what they’re doing. They’re not interested in pulling you along – only saving energy by following. Do they introduce themselves and ask if it’s okay to ride along with you? No. They think they’re doing fine. The best thing to do is drop them. Ride them off your wheel. I like to show them all the courtesy they show me when they latch on to my wheel without communicating.  Which is essentially none, but you have to understand that most of them are just ignorant. They don’t even realize they’re being rude. Big events like the Seagull concentrate these lost souls. 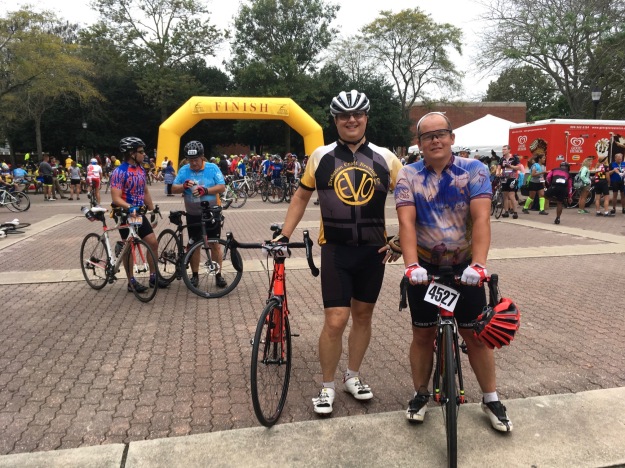 At the finish line with John S. We earned our beer!

Despite the dangers, my friends rode well.  We were together for much of the ride, but Amy, Carol and Stephanie all had injuries to care for by the end and we split up and got to the finish in smaller groups. I finished as strong as I could with John, and we all gathered at the beer garden afterward. It was a fun ride, and a good experience with good friends. One thing I have to say for my friends is that we know how to celebrate!