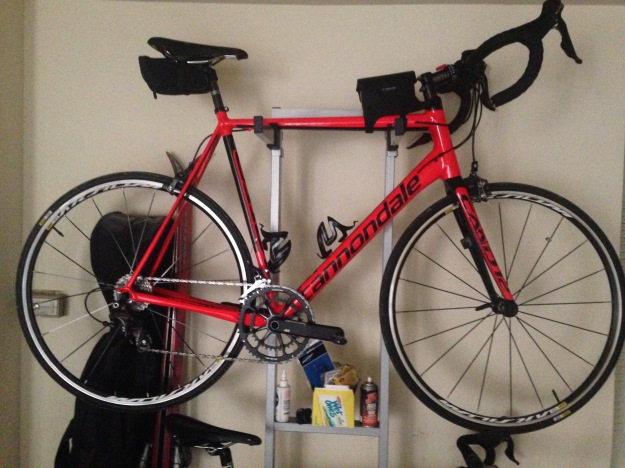 I get this question occasionally. In fact I was asked again recently. The people I ride with don’t ask about these things much, but sometimes new riders or people who know I cycle seriously will ask, and it’s an interesting topic of conversation. Among cyclists, it’s a loaded topic.

The answer in real terms is about 18-19 pounds.  That’s light enough for me. Most people think the bike is very light, particularly when they pick it up. Bike weight is important because you have to overcome the forces that work on you as you pedal.  The classic example is riding up hills.  All other things being equal, the less weight you have to take up that hill, the easier it will be. It has an affect on other aspects of riding as well. So being large means that I have to apply more force to move myself and the bike. Physics can be cruel.

Racers want the lightest possible equipment, but I don’t race. Light weight comes at a price.  The lightest bikes are the most expensive to produce, they are also more fragile because of that weight saving, so a rider as big as I am can ride a superbike, but I  would put some serious strain on it, and unlike top end riders who race on a superbike, I’m far less aerodynamic. Think of it like using an expensive Ferrari supercar to pull a trailer.  You might have the horsepower to do it, but it wasn’t what the car was designed for. So even if I had the money to ride a superbike, I’m hardly the guy to take advantage of the performance gains it may offer.  Having said that, it FEELS nice to ride an expensive bike.  You can’t deny it. So as far as I’m concerned, I think people should ride the nicest bike they can afford.  You’ll want to ride it, and that’s important.

I ride a high quality aluminum framed bike (pictured above). Carbon fiber frames are more expensive, exotic and lighter as a rule, but high end aluminum and low end carbon overlap in price, and even in weight, and high end aluminum is less expensive to produce, so for the same price you can get better components (drivetrain, shifters, brakes) than you can on a carbon frame of similar weight.

My wheels are actually custom – built for strength.  I have no illusions about the utility of low weight components for my riding style.  I rely on power.  Power is torque and strain on my bike.  Material strength is more important to me than weight at this point.

Bike weight doesn’t mean much to me, and my next bike is likely to be heavier than the bikes I currently ride, since I’d like to ride a custom steel bike. Steel is denser than aluminum, so steel frames tend to be heavier, but I’m sure the advantages of a bike built to suit me and my riding style will be worth a little extra bike weight.